Take a look at how Joshua followed Moses, David followed Saul, Paul followed Jesus or we follow Jesus. Or start from the beginning.

What would it take for you to give up everything? More specifically, for whom would you give it up? Ruth abandoned her life to follow her mother-in-law. As a “commitment follower” she set aside any needs, dreams or desires of her own to be with Naomi, the mother of her deceased husband. These are not character traits we see much of today. I don’t even like giving up my place in line. Much less walking away from everything to follow one of my in-laws. Think about instances you’ve given up something: A career to have kids, a job to commit to full-time ministry, the big house to put your spouse through grad school. You fill in the blanks. Now think about your commitment. Was it full-on-never-look-back? Or were there lingering regrets, even bitterness? Ruth seems to take the full-on approach.

With the deaths of her sons, Naomi (also widowed) was ready to head back to her homeland. She gave her daughters-in-law Orpah and Ruth, an out. They had every reason to stay in their own country with their own people. But let’s look at what Ruth told Naomi:

Don’t ask me to leave you and turn back. Wherever you go, I will go; wherever you live, I will live. Your people will be my people, and your God will be my God. Wherever you die, I will die, and there I will be buried. May the Lord punish me severely if I allow anything but death to separate us! Ruth 1:16-17 (NLT)

Let’s take a step back for a moment to look at Ruth’s characteristics as a follower. Instead of seeing Ruth as a woman of devotion and self-sacrifice, let’s explore as though the opposite were true. She could be viewed as fearful, weak and needy. With her husband gone, could it have been easier to stay with his mother? A sort of “known” arrangement? Did she doubt her capabilities on her own and cling to the safety she saw in her mother-in-law? Or maybe she went with her mother-in-law out of duty or obligation. She might have gone to honor her passed husband. Honestly we don’t know. Someone who surrenders all for another are often described that way. Weak and needy. Blind and brainwashed. Timid. Coward. Push-over. But her words say something different: 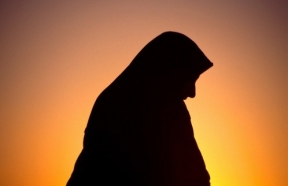 1.) Ruth trusted where Naomi was going
“Where you go I go, where you live I live. Your people will be my people.” Ruth was Moabite, a people with whom the nation of Israel had a long and tenuous relationship. Despite that fact, it seems Naomi and her hubby, escaping a famine in Judah, were able to make a life for themselves in Moab. And their sons married local Moabite women. I can only surmise Naomi had been a singular force in Ruth’s life. She was dedicated to Naomi the person, not just who she represented. Whatever Naomi had become to her, she wanted more of it. Ruth’s words are those of allegiance, not duty. Fortitude, not fear. Naomi might have represented familiarity, the place they were going would not.  Not to mention the trip was a week-long journey to the other side of the Jordan River with over 2000 feet of elevation. This was not a walk in the park. Ruth aligned herself with land of Judah and the Israelites through Naomi. I can only think of one person in my adult life who even came close to eliciting this type of followership dedication. An employer who took me under her wing and mentored me through my career. She was passionate but tender. A Godly woman who I trusted completely. She taught more about life than about the job and we forged a deep, lasting friendship. If you encounter someone in your life worthy of this type of following, praise God and honor them with your devotion. 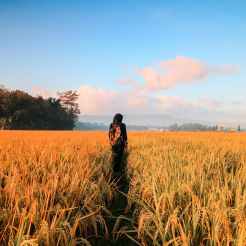 2.) Ruth incorporated Naomi’s beliefs into her own.
I’m going to take a guess that Ruth had already accepted Yahweh as the one true God. So going back to Moab would mean going back to the gods they worshipped. She was so committed to Naomi she surrendered her life to “Naomi’s God” and left her old identity behind. This is a woman making a brave choice to trust and follow, not a needy tag along. She shows resolve, not uncertainty. Ruth left her country with no question in her mind where she wanted live, with whom and for whom she wanted to live it.

We may follow some people with that kind of dedication, but how much more so when we decide to follow Jesus. We could say those words describing our dedication to him: Don’t ask me to leave Jesus and turn back (makes me think of that old him I Have Decided To Follow Jesus). Wherever He goes, I will go; wherever He lives, I will live. His people will be my people, and His God will be my God. Ruth never looked back, and neither should we.

3.) Ruth followed Naomi’s instructions unquestioningly
Naomi was welcomed back by her people, but with no man to support or protect these two widows, they were in a vulnerable position. Ruth goes right to work to gather food and wages (Ruth 2:2-3). Her work ethic and her sacrifice for her mother-in-law captures the attention of Boaz who is not only the owner, but one of Naomi’s relatives. On learning this Naomi sees Ruth’s opportunity for a better life. She sends Ruth to work throughout the season. Then advises her in proper dating procedure (3:1-4). Ruth tells her “I will do everything you tell me to do.”

If you’ve visited a foreign country you can empathize with the uncertainty that comes with following their rules, customs, street signs! To have a guide can be a huge relief, but it takes trust. Ruth was entirely dependent on Naomi’s guidance. And she never hesitated. She trusted Naomi unconditionally and followed her every instruction. Handing over decision making to someone else takes tremendous strength of will, fortitude and resolution. It’s in our nature to question, safeguard and resist.  It’s reasonable to want to protect ourselves. Children question their parents instructions all the time. I will say, as a mom I would love for them to trust me! I have their best interests at heart! Culture, age, gender, it doesn’t matter. Trust is huge. And it takes a strong person to give it.

Look at it this way, had Ruth not unconditionally followed Naomi she would not have met Boaz. If she hadn’t met Boaz she would not have married this tender, kind, honorable man. And if they hadn’t married, she would not be the great-grandmother of King David, whose family line leads to the birth of Jesus. See how God worked it all out?

When we commit our path to someone else’s decisions, we should trust that ultimately God is leading. Only He can connect the dots like he did for Ruth. We have to let go of the delusion that we can forge the best path. Letting go of fear, doubt and suspicion gives us the opportunity for God to lead us by way of another person. Will they make mistakes? Probably. Will there be times of backtracking? Maybe. But if God put them there for you to follow, the end result will be good. Because God is good. You never know where a trip with your mother-in-law may lead!

2 thoughts on “The Best Leaders Are Followers: 3 Qualities of Ruth”